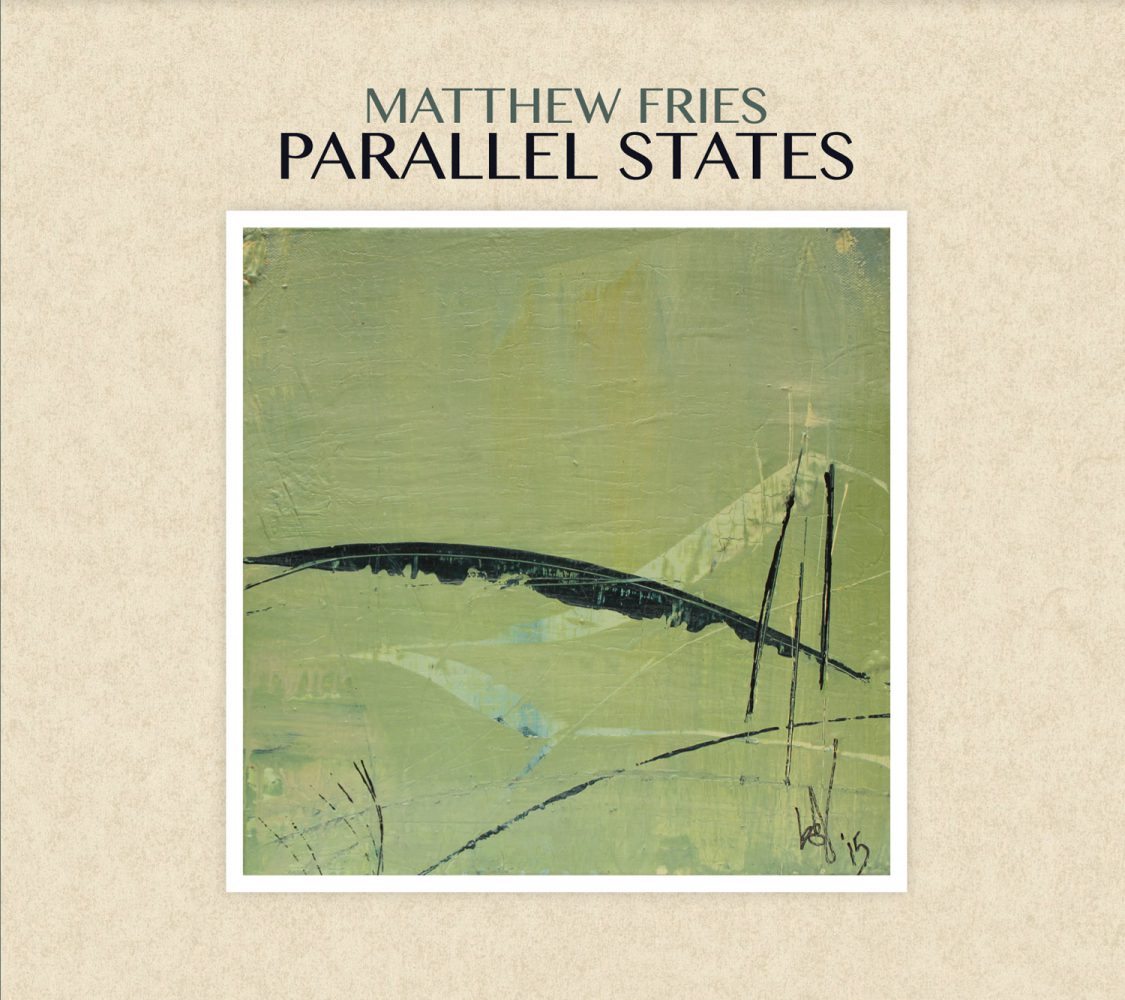 “There is some wonderful, lyrical, expressive playing to be enjoyed on ‘Parallel States’… This is music to lose yourself in, with Fries proving just what a consummate performer he is. His tunes are full of joy and wonderment, whilst still retaining a thoughtful, skillful repose.”

Here’s an interesting concept. “Parallel States” is a collection of nine solo pieces of music from pianist Matthew Fries, composed in a collaborative project with his sister, visual artist Loryn Spangler-Jones. Some of the music was inspired by the paintings, and vice-versa. Fries explains: “Loryn and I worked together to create a special set of music and art. We began by discussing what inspires us as artists, and we decided to step up the creative challenge by inspiring each other directly to create new work. To do this we reached across the boundaries of art and music and sent each other samples of what we were working on. We both then created pieces inspired by what we were sent. What we ended up with is a set of parallel art and music.” If you stop and think about it, this concept isn’t perhaps as unusual as it sounds at first. Musicians and artists take inspiration from all things too numerous to mention, including what they see, hear, feel, touch, taste and smell. The emotive reaction to such things often inspire a musician or artist on to great new things. In this case though, the idea behind the project is far more specific, with brother and sister pooling their combined talents to work together on a shared creative process. “It went both ways” Spangler-Jones adds, “Each song has a corresponding piece of work with the same title to accompany it”.

Pianist/composer Fries lives in New York and tours frequently with his collaborative trio “TRI-FI”. He is a regular member of Curtis Stigers’ band and also performs with a diverse line-up of musicians including Stacey Kent, DeeDee Bridgewater, Steve Wilson and Dave Samuels, to name but a few. “Parallel States” is the composer’s first solo piano album, one which brought new challenges to the pianist, not just inherently within the project itself, but also in not having other musicians alongside him. “This is my first solo piano recording. I’ve been feeling for a long time that I wanted to record this genre, but it was a real challenge for me” he says. “Playing solo piano you’re so free to express yourself, but you’re also exposing a very personal view of your music. Some of the tunes are more fully composed piano pieces, and others are more jazz songs that are open to a more traditional jazz interpretation. All of the recorded performances rely heavily on improvisation.”

As an avid music listener, and occasional art lover, I found myself drawn in to this project. The front cover of the album sleeve features Loryn Spangler-Jones’ visual piece “Whirl”. Inside, there are three further small images from the artist, with explanatory text and information. One thing that strikes me is that the overall experience of listening to this album could have been improved if separate prints of the artist’s work were supplied within the album’s packaging. This would have given an added understanding as to how the visual art was interpreted by the composer, and in turn, how the music inspired the artist. Obviously this might well have been financially difficult to do, but I do feel that the overall experience would have been heightened.

There is some wonderful, lyrical, expressive playing to be enjoyed on “Parallel States”. Highlights for this listener include the sweet romanticism of “I Remember When”. This is music to lose yourself in, with Fries proving just what a consummate performer he is. His tunes are full of joy and wonderment, whilst still retaining a thoughtful, skillful repose. Several of his tunes highlight a delicate, melodic beauty, none more so than the beautifully composed “Garden”. This tune was written as a tribute to British pianist John Taylor, who passed away last year. And a fitting tribute it is too, with Fries showing a maturity in his writing that is evident for all to hear. “I called it Garden” explains Fries, “because much of the work Loryn was creating looked like flowers to me – a little attempt to create a more literal connection between abstract art and instrumental music. John was such a beautiful and sensitive pianist and composer.” The free-flowing nature of “Whirl” is an exhilarating piece, its lyrical themes, riffs and motifs, all bringing together the music and art perfectly. There’s an imagination set alight on “Just Keep Swimming”. Fries also highlights this track as one that he found particularly inspiring; “This was one of the first images that Loryn sent to me. I loved it right away. I love the maturity and fearlessness in the open space that she leaves in what is a pretty large canvas.” And the pianist’s initial thoughts are certainly captured well within the music. “It feels peaceful, honest and bold to me” he continues. “It seemed to express so many of the things I was feeling about creating a solo piano recording.” The closing number, “Kerrie”, ends the album on a charming, uplifting note.

The music and art of “Parallel States” complement each other very well. This is an album of solo piano music that can be enjoyed either as a stand-alone musical journey, or as a companion piece to the visual art that helped inspire the music. Either way, it makes for a very pleasant listen.