My blog – a collection of articles and posts not directly related to music news, but most likely interesting (and maybe even entertaining) to someone somewhere – hopefully…

Frustration Solved: How to Loop a Playlist in JPlayer

OK. This is total geekiness, but that’s just who I am. I’ve spent the last few hours (at least!) looking for any documentation that explains how to have a playlist you create in JPlayer loop by default. I knew it had to be possible since there’s a nifty “repeat” command built right into the player. But I’ll be damned if anybody over at JPlayer HQ actually included it in the documentation for their Playlist Add-on!

I just redesigned the website for my piano trio, TRI-FI. I tried for a more fun design style and I’ve got it set up to sell CD-quality downloads and 24bit HD audio downloads right from the website. Hopefully it will make us rich and famous – or at least “jazz famous…” END_OF_DOCUMENT_TOKEN_TO_BE_REPLACED

One of the perks of being a working jazz musician is the travel. Many would complain this is one of the worst parts, which is technically also true because being away from family, dealing with airlines and dragging suitcases and equipment in and out of hotels can be tedious to say the least. But if you manage to focus on the beauty of seeing new sites and new cultures, the experience can be rewarding. Plus you get to play music, and there really isn’t anything better than that.

Every once in a while you hit on a special moment or a special place. That happened to me last weekend when I got to play in Moscow, Russia for the first time. Sandwiched in the middle of a 2 1/2 week tour of the UK, we had a single gig at the “International House of Music” (I’m sure there’s a better translation, but this one makes me smile). The gig itself was fantastic. I was performing with Curtis Stigers and the venue was a concert hall where we played for about 1200 Russians. Not bad, eh?

The moment and place I’m writing about came the evening before.

END_OF_DOCUMENT_TOKEN_TO_BE_REPLACED

“Dig and be dug” is a phrase I use often and it’s pretty simple concept that we as jazz artists often forget about. I see it as the Golden Rule for music – do unto others as you’d have them do to you. Apply that to checking out other musicians’ playing and the concept is simple, right? Maybe.

So often going to a jazz club when you are a jazz musician doesn’t mean going to hear the music. It’s about being “on the scene.” It means going to the club, walking in without paying and standing in the back of the club with a bunch of other musicians and talking, basically ignoring what’s really going on – the music. I’ve seen it everywhere from NYC clubs I frequent like Smalls, Smoke, or even The Village Vanguard. I’ve seen it at festivals and concerts. I’ve seen paying patrons turn around and ask musicians to stop talking so they can enjoy the music! How backwards is that?

Good or bad, professional or student, it’s still live music and live music is REALLY special. It exists only for a fleeting moment and then it’s gone. It’s worth hearing. 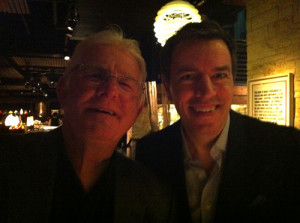 I was playing my usual Monday night gig at Hillstone in NYC last week and one of my favorite pianists wandered in – Bill Mays. I’ve met Bill a few times and I’m a fan of his music – he consistently comes up with some of the most creative textures on the piano – but he doesn’t really know me and certainly didn’t come to the bar specifically to hear me. This place is not really a listening room at all (though the sound is great when it not too rowdy) and in spite of what or how we play, we are basically sonic wallpaper and there only for effect. But Bill and his wife took a seat right up front and were focused on what we were doing – listening, applauding. Talk about feeling flattered! END_OF_DOCUMENT_TOKEN_TO_BE_REPLACED

Just launched! I created this WordPress site for my friend, Keith Hall. He’s a drummer & educator living in Kalamazoo, Michigan. He’s using this new site to showcase his performance credits (he plays with me in my trio, TRI-FI) as well as his educational programs. He’s doing a lot of great stuff – from summer camps to after-school programs. END_OF_DOCUMENT_TOKEN_TO_BE_REPLACED

Christmas Arrangement Giveaway #4: I Heard the Bells on Christmas Day

I Heard the Bells on Christmas Day is a carol written by John Baptiste Calkin way back in 1872 to a poem written by Henry Wadworth Longfellow. I guess it’s a lesser-known carol, but it’s always been one of my favorites. It’s a short melody that I expanded with an intro, an interlude and a longer coda to record on “A TRI-FI CHRISTMAS” – plus a few jazzy solos of course…

END_OF_DOCUMENT_TOKEN_TO_BE_REPLACED

Just launched! I converted Helen Yee‘s website to WordPress. She’s a multi-instrumentalist and composer here in NYC – playing violin and Chinese instruments (and occasionally a cake pan – you’ll need to visit her site for an explanation of that one).

She came up with the original design and color scheme using PowerPoint – I took her ideas and prettied them up just a little bit (I hope). I converted the HTML layout it into a custom WordPress theme. Now she’s got complete control of her online world. END_OF_DOCUMENT_TOKEN_TO_BE_REPLACED

What would happen if the Jazztet’s “Killer Joe” got together with Sammy Cahn and Jule Styne’s “Let It Snow?” That’s exactly what happens in this arrangement of the seasonal classic (which we affectionately nickname “Killer Snow“). This is the version I recently recorded on “A TRI-FI Christmas.”

END_OF_DOCUMENT_TOKEN_TO_BE_REPLACED

Once again, in the spirit of the season I’ve got more music for you. This is my arrangement of the Nelson/Rollins classic “Frosty the Snowman.” After my last lead-sheet download I had a few specific requests for this particular arrangement – the first track from the new album “A TRI-FI CHRISTMAS.”

END_OF_DOCUMENT_TOKEN_TO_BE_REPLACED

We took time out from our TRI-FI tour in Michigan this week to visit a rainy Christmas market. You know, there is nothing like a soggy Santa to really put you in the mood for the holidays! I thought this photo was just too great not to share.

Being that it is December, this weekend we got the chance to play a bunch of the music from our new TRI-FI Christmas album – which made this quick (but cold and rainy) tour that much more festive.

On Tour
Privacy Settings
We use cookies to enhance your experience while using our website. If you are using our Services via a browser you can restrict, block or remove cookies through your web browser settings. We also use content and scripts from third parties that may use tracking technologies. You can selectively provide your consent below to allow such third party embeds. For complete information about the cookies we use, data we collect and how we process them, please check our Privacy Policy
Save